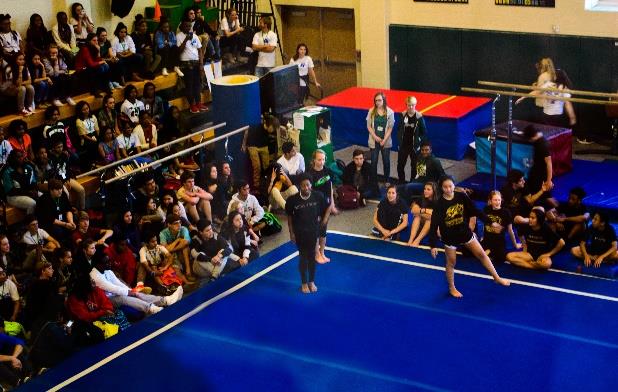 The LHSAA boys gymnastics state meet was a typical one for the sport in Louisiana.

The top four boys in the all-around competition Friday came from four different schools, and none had a chance at the team championship at Baton Rouge High School.

Robbie Shamp of Thomas Jefferson (72.40 points in the all-around), Travis Braud of St. Amant (69.80), Dante Cecil of Brother Martin (68.80), and Luke Anderson of Vandebilt Catholic (67.20) topped the individual scorers, but none of their schools fielded a full team.

Likewise Caddo Magnet racked up 184.20 points in Division II but none in Division I, so they were out of the running for team honors.

Does it bother the top gymnasts that they have no chance to take home at team title?

“Honestly no,” Braud said. “The outcome doesn’t really matter. We just come out here to have fun. Those of us who compete in (USA Gymnastics) are like one family, and one team, so we just have fun.”

Baton Rouge High coach and meet director Kevin Nee was a little more emotional about winning another in a long line of championships during his 39-year tenure.

“I got choked up myself. They don’t get old,” he said. “It’s awesome. It’s sweet. That’s why we’re in this gym in August, for this moment right here.”

Sophomore Thomas Street led the Bulldogs by finishing fifth with 67.10 points in the all-around in his first venture into Division I. Alden Morton (61.90) was eighth and Xavin Weatherspoon tallied 56.20 points for 10th despite sitting out the high bar event.

“A lot of things came together today, and I was pleased with that,” he said. “I told them to not leave anything on the floor, and I don’t think any of them did.”

It was the second straight title for Shamp, who battled back and forth with Braud throughout the meet. Braud led by a point going into the final event, the vault, where Shamp made his highest score of the day (13.80) to lock up first place.

Shamp also broke 13.00 in the floor exercise with a crowd-pleasing routine that gained him a 13.70. The other top scores of the day were Braud’s 12.70 in Floor Exercise and Weatherspoon’s 12.50 in the same event.

Shamp echoed Braud’s comments by using the word “fun” seven times in a short interview. The only hiccup in his day’s work was a 9.60 on the pommel horse.

“I was training for something else,” he said, “and it was just bad. But it was especially fun knowing this was Travis’ last year.”

Braud, who will be on the sideline as an LSU cheerleader next year, was also presented an Academic All-State award by the LHSAA, the only one of the 215 gymnasts entered in the state meet to win the award.