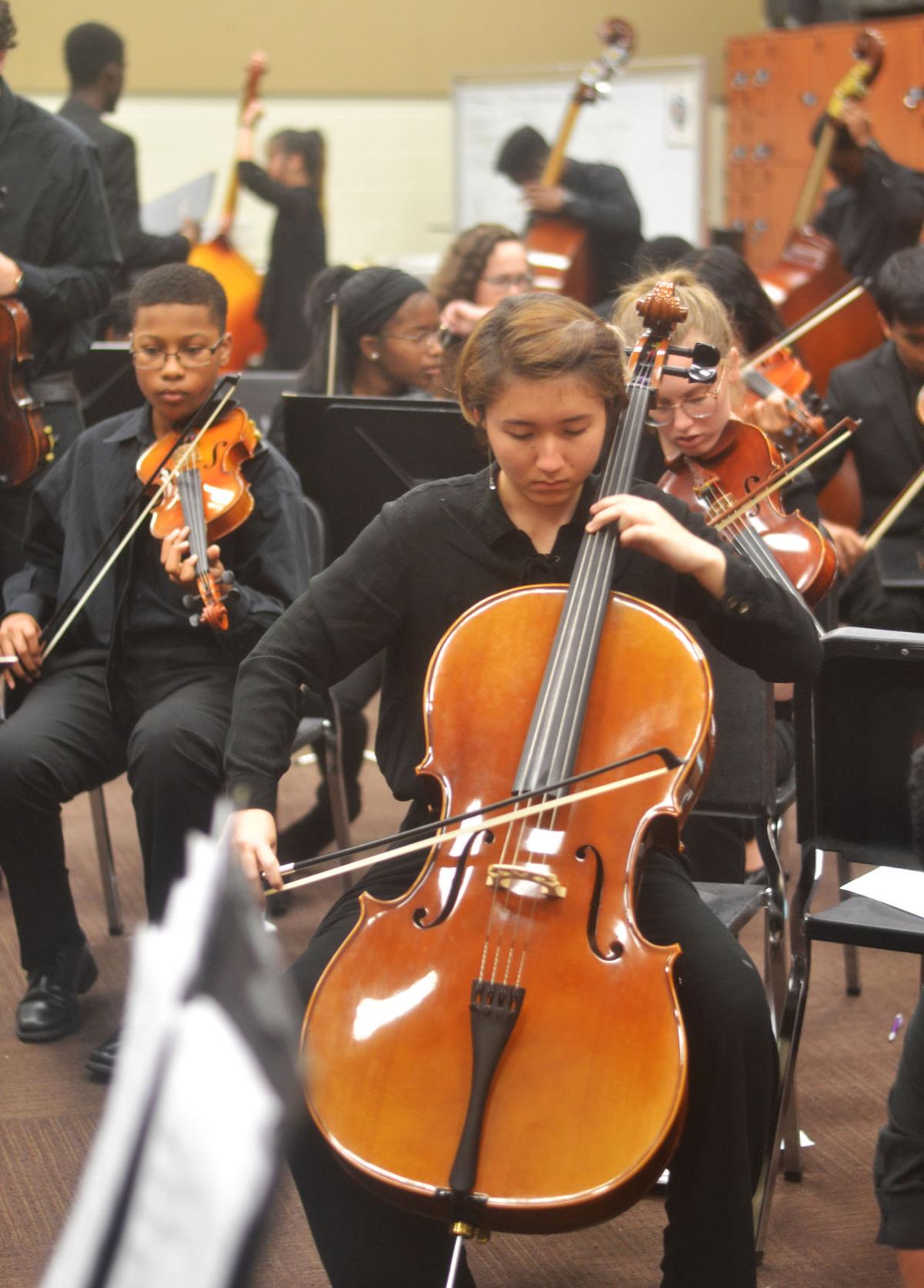 The Yellow and Red Knight fought as the champion of nearly 100 screaming Baton Rouge student musicians and their supporters. He defeated the Black and Red Knight during the staged Medieval Times tournament, where knights fight for both prize and honor.

Life then imitated art as the Baton Rouge Magnet High ensembles secured multiple victories and the honor to be among the best student musicians in the nation.

Medieval Times was the backdrop of the Chicago Heritage Festival awards ceremony. Baton Rouge Magnet, under the direction of Christopher Frazier, director of orchestras, and BJ McGibney, band director, competed in the Symphony Orchestra, Chamber Orchestra and Winds Ensemble categories.

Middle and high school groups from eight states and Canada participated in the instrumental and choral competition earlier this month.

The dust eventually settled over Medieval Times arena and both the Symphony and Chamber orchestras received first and gold, and the Adjudicator Award in their category. The Wind Ensemble earned a Silver ranking and won third place in its category.

The Chamber Orchestra’s judge’s scores earned the added distinction of being the top overall group at the festival. Erina Buchholz, concertmaster and soloist, was among nine students honored for their individual contributions to their groups’ performances.

Texas native McGibney is fairly new in his position at Baton Rouge High but said he feels they are gaining momentum while moving in the right direction. Many of his students performed in both the Wind Ensemble and the Symphony Orchestra.

“I’m very proud of our kids and I’m very pleased with the way the trip came out; we had some well-behaved kids,” McGibney said. “They came and performed well. I started seeing some pride in our band and our program here at Baton Rouge, and I’m really excited to be able to build on that.”

Frazier, a native of Baton Rouge and Baton Rouge Magnet High alumnus, was equally delighted and emotionally overcome by what his orchestras accomplished in Chicago. He said they have been working for this performance since December, but one of the pieces, the Third Movement of St. Paul Suite, was introduced a mere week earlier.

“Our performance was our fourth time doing that piece,” Frazier said. “They worked hard and diligently having only two class periods a week to practice.”

Frazier’s orchestra fought through the obstacles of the 2016 flood to secure its right to perform in a New York City showcase event. “The competition the year before was what set us up to be able to perform in Carnegie Hall,” he said.

This year’s Baton Rouge High group was one of a select number of Chicago competitors who received invitations to perform at the 2019 showcase event that will be held in San Francisco.

“We are going to have to play this one by ear,” Frazier said.

Frazier said his students are primed for success before they hit the stage.

“I feel like the students have already achieved academically so they already have a leg up in a lot situation being thinkers, but being from south Louisiana there’s a little bit of soul and a little bit of music connection That we have down here,” he said.

Frazier’s wife, Undrella Frazier, added that he is a well of passion from which his students draw. “My husband makes a lot of sacrifices and he gives himself in so many ways to these kids,” she said. “He pours himself into them, and they feed off that.”

The Baton Rouge High group is larger than most competing, and Frazier said success depends on the section leaders.

“We rely heavily on our section leaders and basically it runs like a well-oiled machine once you get the section leaders motivated, involved and learning how to be appropriate leaders that tends to rub off on everybody else and then you find kids holding their own sectionals outside of school because they really truly care about achieving success,” he said. “They celebrate every time someone earns a scholarship or makes another accomplishment.”

Accomplishments on the stage often can lead to doors of opportunity for college, and Frazier encourages scholarship and career planning from a student’s freshman year. “Some kids will have an opportunity to earn extra money for college and not have to major in music and do other things,” he said. “I have one kid in particular who will be majoring in engineering, but because he played his viola well, he has an opportunity to pay for all his housing.”

Orchestra is a family affair and high priority for the Fraziers. “We all support each other and we all uplift each other in whatever it is we have to do,” Frazier said adding, “One person who is always by my side is my wife, my right and left hand — my neck.”

Frazier acknowledges that his groups have gained local, state and national recognition, but he is not resting on any laurels. He wants to build a world-class orchestra program in Baton Rouge. Even beyond the accolades and the honor, the program’s success should provide permanent pathways for the participants.

“One of the most important things is for the kids to be able to feel that they can be successful,” Frazier said. “Year in and year out, we lose so many kids to graduation and we lose kids to AP classes and we lose kids to honors classes, but we continue to work hard with whoever we have.”

The next big accomplishment for the orchestra program would be Frazier’s goal of securing an orchestra honors credit. He said it will allow the program to retain students who are academically competitive and often drop orchestra to enroll in more AP and honors classes.

The next big event for the school’s Symphony Orchestra will be its performance Tuesday, April 24, at the State Orchestra Festival in Lake Charles.