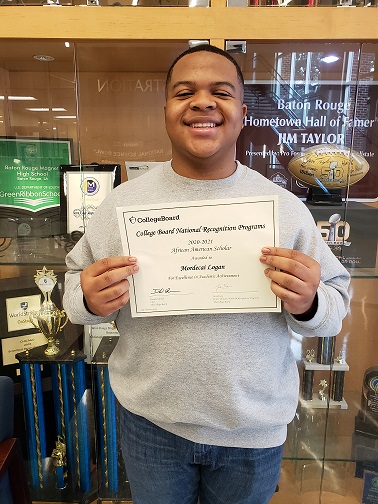 Baton Rouge Magnet High School Senior Mordecai Logan has been recognized as an African American Scholar by the College Board National Recognition Program. Last Spring, an invitation was extended to African American Juniors who scored in the top 2.5% of PSAT/NMSQT test takers to submit an extensive application. The College Board evaluated all submitted applications, choosing Logan as an African American Scholar.  Logan is the son of Ardrene and Dewayne Logan. He attended Sherwood Middle Academic Magnet and Cedarcrest-Southmoor Elementary School. Logan was recently featured in “225 Magazine” as a Future Community Leader for his work in creating an App to close food deserts in Noth Baton Rouge.  He intends to Major in Computer Science in College to become a Software Engineer.