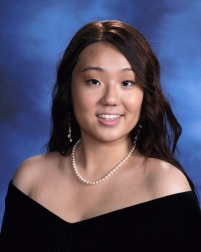 Baton Rouge Magnet High School Senior Ju-Woo Nho has been named one of 161 Presidential Scholars by U.S. Secretary of Education Dr. Miguel Cardona. Nho is the President of the BRMHS Beta Club, a National Merit Scholar, and will attend Brown University in the Fall. She nominated Dr. Carol Price as her Distinguished Teacher.

“The 2021 Presidential Scholars represent extraordinary achievements for our extraordinary times,” said U.S. Secretary of Education Miguel Cardona. “I am delighted to join President Biden in saluting these outstanding young people for their achievements, service, character and continued pursuit of excellence. Their examples make me proud and hopeful about the future. Honoring them can remind us all of the great potential in each new generation and renew our commitment to helping them achieve their dreams.”

The White House Commission on Presidential Scholars selects scholars annually based on their academic success, artistic and technical excellence, essays, school evaluations and transcripts, as well as evidence of community service, leadership and demonstrated commitment to high ideals.

Of the 3.6 million students expected to graduate from high school this year, more than 6,000 candidates qualified for the 2021 awards determined by outstanding performance on the College Board SAT or ACT exams or through nominations made by Chief State School Officers, other partner recognition organizations and the National YoungArts Foundation’s nationwide YoungArts™ program.

As directed by Presidential Executive Order, the 2021 U.S. Presidential Scholars are comprised of one young man and one young woman from each state, the District of Columbia and Puerto Rico, and U.S. families living abroad, as well as 15 chosen at-large, 20 Scholars in the arts and 20 Scholars in career and technical education.

Created in 1964, the U.S. Presidential Scholars Program has honored over 7,600 of the nation’s top-performing students. The program was expanded in 1979 to recognize students who demonstrate exceptional talent in the visual, literary and performing arts. In 2015, the program was again extended to recognize students who demonstrate ability and accomplishment in career and technical education fields.

The Presidential Scholars Class of 2021 will be recognized for their outstanding achievement this summer.

A complete list of 2021 U.S. Presidential Scholars follows and is also available at http://www.ed.gov/psp.